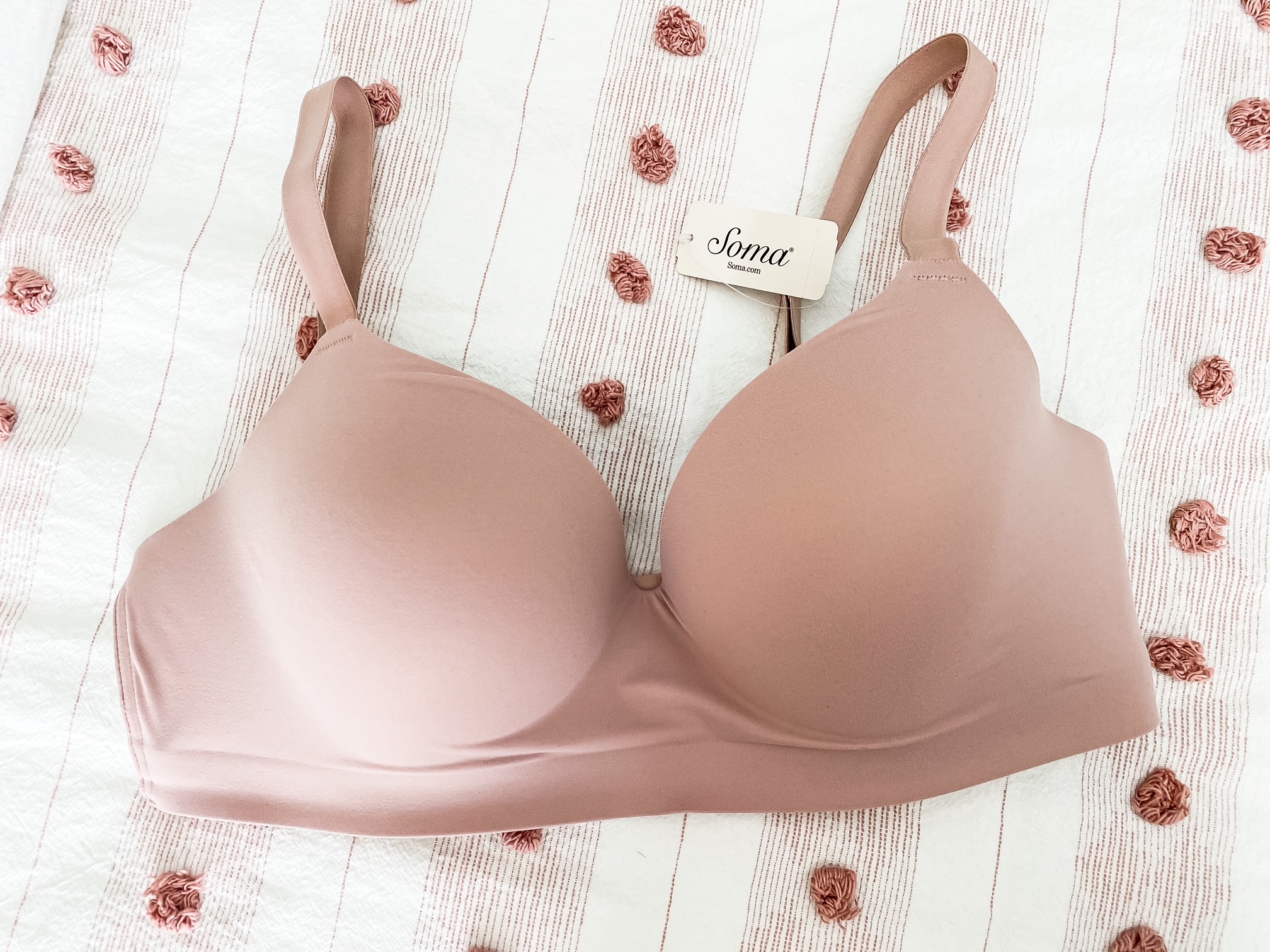 As a new mama, my body has been through a lot over the last year. From being pregnant, trying to breast feed and then attempting to loose the baby weight; my “girls” have gone through it all with me. During this time, regular bras haven’t really been in my rotation simply because I went from maternity bras straight to stretchy nursing bras and then Covid hit and I feel like everyone was all like “what’s a bra?”.

Now, I am all for the comfy life but sometimes a real bra actually is necessary. I had seen several of my favorite influencers raving about the Soma Enbliss Wireless bra. They stated that it was not only supportive and flattering but also comfortable. I have owned a few Soma bras in the past and really liked them but had not tried out their wireless options before. So when I heard Soma was having sale on this particular “wonder” bra, I thought now is the time to try it out!

Since I wasn’t able to physically try it on before buying, I pulled out my measuring tape and used the Soma sizing chart to help make my selection. If possible, I always to to read reviews before purchasing anything online. I read many reviews saying that this bra’s band runs small so taking that into consideration, I ended up sizing up one size in the band and sticking with my normal cup size.

When I received my Enbliss Wireless bra a short time later, I was instantly in love with the color (Adobe Rose) and the BUTTERY SOFT material. I felt that the bra seemed much more high end than it’s price tag as well. However, when I tried it on, I had to double check what size I ordered as it was pretty tight around the band and I felt like it would give me the dreaded back bulge under my clothes. The size was correct but the bra was small… But how? I had sized up! Feeling frustrated I quickly took it off and went on with my day.

A few days later I had received some new clothes and wanted a real bra (i.e. not my usual bralettes I tend to wear around the house) to try them on. I grabbed the Enbliss hoping this time something would be different since I never actually tried it on under any clothes. I don’t know how, but something did change. The bra looked so good under my new tee shirt. I was shocked since the shirt’s material was heavier and kind of clingy which would typically show any cup lines in my usual bras. After looking at the construction of the bra a bit more, I noticed that the Enbliss is double lined; meaning the cups are actually under a separate, extra lining of material which helps fully conceal them. The band is also fairly wide which I think reduces the back-bulge effect even with it sitting tighter on your body.

After wearing my bra a few times, it did end up stretching out slightly but not in a bad way. It more or less just began to fit my body better. I feel that the Enbliss Wireless is great option for those looking to get great support without the uncomfortable wires and bulky padding that you get in other push up bras. However, be sure to size up one size in the band to be safe! At the end of the day, this bra definitely won me over and I will grab more colors whenever they are on sale again. Me and my girls give it a Honey, Yasss!

Where are all my large chested ladies at? Are you a DDD and above and hate wearing bras because they are basically just female torture chambers? That is 100% my feelings on the topic. In fact, I have refused to wear a traditional bra for the last 2 years and instead have opted for a more comfortable and functional sports bra. So when the other Honest Honies said they wanted to review a bra… well I was annoyed! I had doubts that I could even find one that fit my GG cup size let alone be worth spending my money on. I went along with it though because I’m a good sport. At the very least, I would end up writing a scathing review about how I am, yet again, left out due to my size and that companies need to be more inclusive!

Yup, I had a lot of preconceived notions going in and I was ready to hate whatever bra I ended up with. So I logged onto the Soma website to find this influencer-approved Enbliss Wireless Bra. Surprise, surprise, sizing only went up to a DD! Feeling vindicated and justified, I told the girls I would have to sit this review out. Then they pointed out that the site has DD & up section and I should see if there are any alternative wireless bras that might work for me. Indeed there was. the Embraceable Full Coverage Wireless Unlined Bra. It resembled the kind of bras my grandmother wore but heck there was a big sale and at $29 per bra I figured what do I have to lose.

When the bra arrived it looked even worse than I thought. After one look at it, I knew that it was about to give me cone boobs. I was horrified! But alas, I slipped her on and adjusted the girls inside to sit evenly. I looked in the mirror and thought, yup I am wearing a grandma bra! Then I grabbed a t-shirt and threw it over to see how it looked under clothing. I honestly don’t think I have ever been so shocked in my life. It looked GOOD! Like REALY GOOD! Like my usually large chest actually look a bit smaller and more flattering in clothes good. How was this possible and how could I have been so wrong?

Long story short, the Embraceable Full Coverage Wireless Unlined Bra is now my go to t-shirt bra. It provides good support with out being too uncomfortable, all while actually helping down-play my larger breast size which I love. I do have to say it isn’t exactly what I would call a “sexy” bra but for the purposes of a full-coverage, comfortable t-shirt bra it does the job it is meant to do! It’s a Honey, Yasss for me!

Hey Honies! Now that we’re all hopefully a little more comfortable with each other, it’s time to start reviewing some products that are personal to us. This next product is something that virtually all women must think about and the girls will either love you or hate you for it. Yes, I’m talking about our Ta-Ta’s best friend (aka bras).

By now, I’m sure many of you have your favorite brands or bra styles and if you’re like me it’s somewhat difficult to deviate from what I know works. I am an avid Victoria’s Secret fan and the Very Sexy Push-Up, in particular. Yes, I know, you either love or hate VS. (Fun Fact: I worked for Victoria’s Secret for over 4 years throughout all my college years. This probably explains why I’ve failed to switch up my bra type for the last 14 years.)

Clearly, searching for new bra styles was not at the top of my priority list, but a few of the influencer’s positive opinions on the Soma Enbliss Wireless Bra took care of the searching part for me. I ordered the bra in my regular size: 36C in the Warm Amber color. If I’m being completely honest, when I first tried on the bra I was not a fan. I felt like the band was pretty tight, even on a looser setting. Plus, I wasn’t thrilled with the shape it gave the girls. However, that first try on was strictly just that, as I tried it on right before bed. I figured I would need to wear the bra on different occasions with various tops/dresses to get a good feel for it.

Over the next couple of days, I put the Soma bra to the test with different shirts, both tighter and looser fitting. I even tried wearing the bra under a simple t-shirt dress. I noticed that as I wore the bra more I found myself liking it more. I realized that with more wear the band and cup area stretched out a little more, not to the point where it’s baggy and unsupportive. It almost seems like overall the bra is made a tad bit tighter (referring to the band and cups here) and I’m completely taking a guess here, but that may be by design because after all it is a wireless bra. Regardless, my initial try on made me think the bra was completely too small, but now with the small amount of stretch in both areas, it’s changed my opinion on that. The comfort and support of this bra is also a plus. I have tried other VS wireless bras in the past and was not impressed by them.

I purchased this bra while it was on a promotion at $29, which in my opinion was a reasonable price. Normally this bra runs you $48, which still seems like a fair price, especially for a quality bra. If I’m being honest here, I probably wouldn’t pay full price for this particular bra though. I like it for the promo price tag but knowing what my first impression was and if I combined that with the regular price of almost $50, this likely would’ve left me feeling a bit more disappointed. For those reasons, this product is just, meh for me. I think if I had gotten that initial “wow” factor (like I have with other bras) this would’ve been a Honey, Yasss, but since I had to give it a few tries and knowing the regular price of this product is my reasoning behind my rating. While I am in no rush, I still may purchase the black color of this bra, simply for its comfort, but I will of course wait for the next promotion. I hope you find this review helpful and completely supportive. 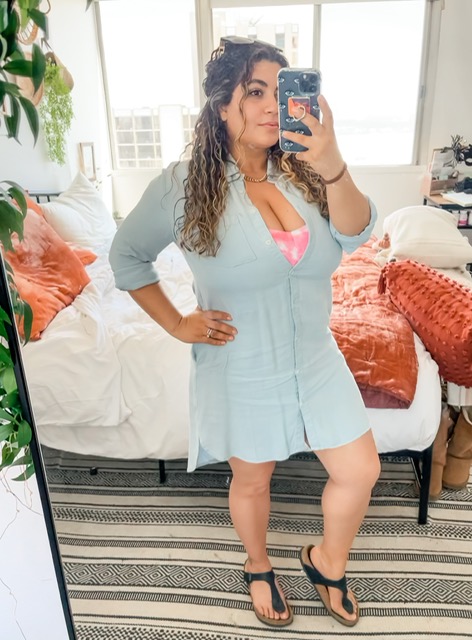 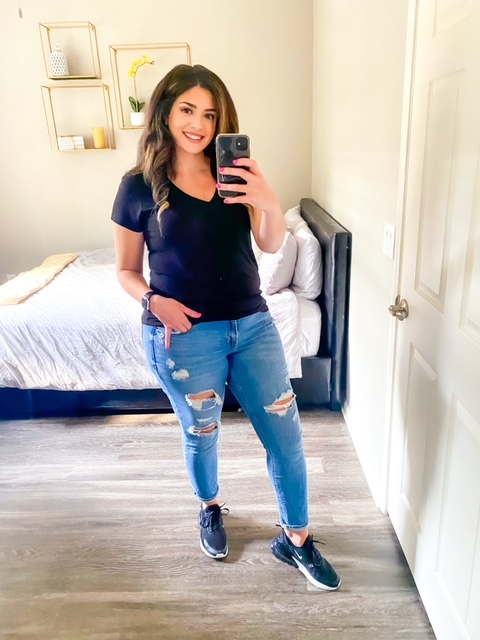 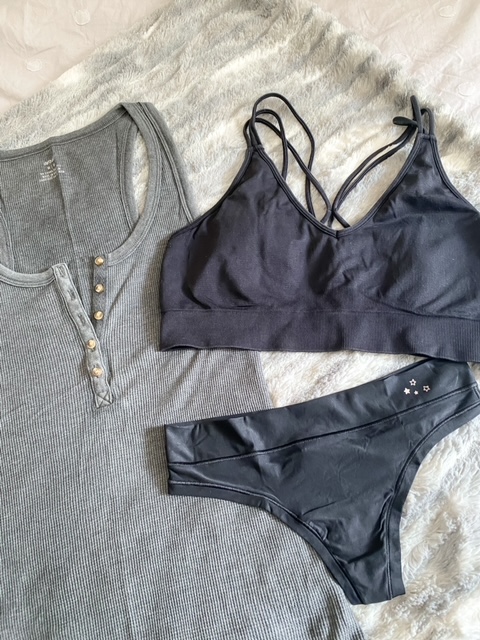 DO IT FOR THE GRAM